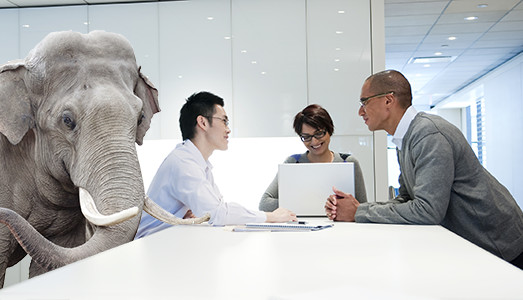 The Buy-Sell Agreement a.k.a. The Elephant in the Room

Financial independence and the idea of being “your own boss” leads many Canadians to go into business for themselves in a passionate attempt to bring their dream to reality.  In order to raise the start-up capital and resource the business with the necessary skill sets to give the company the best chances of success, it often involves more than one shareholder.   Unfortunately, almost half of new ventures will not survive the first five years.  Obviously there are many reasons that a business can fail, however the most common reasons can quickly be compounded by the unforeseen exit of a shareholder.    Every financial stakeholder in a small business has expectations with respect to the question of: “What happens if someone wants out or in the worst case scenario doesn’t make it home tomorrow night?”   In reality there is a huge gap between what is often assumed and what is written down and part of a binding agreement.   Everyone is excited and pulling together when a company is founded and often the enthusiasm for the vision of what the business can become leads to the phenomenon that the ‘elephant in the room’ is conveniently overlooked until it’s too late.  The increased stress of dealing with the unplanned exit of a shareholder appears to cause a significant increase in the number of amnesia cases with respect to what may have been agreed upon as a handshake.  As a frazzled mother of twin 10 year old boys once said: “It’s all fun and games until somebody gets a stick in the eye.”

What exactly is a buy‐sell agreement?

Shareholder agreements are legally binding contracts that are signed by each shareholder as soon as a share structure is agreed upon.   However, many of those agreements fall short of a buy-sell clause that outlines how the owners will deal with each other in the event that an individual is confronted with various situations.   A number of circumstances can lead to an owner becoming unwilling or unable to continue to commit to the success of the business.  Divorce, bankruptcy, retirement, disability and a desire to sell shares because of a relationship breakdown within the company can lead to the exit of a shareholder.  And even though medical science is extending normal life expectancy for many Canadians, the mortality rate has not changed: it is still 100%.  The sudden or untimely death of a shareholder can impact the business to the extent that it suffers a major setback and in the worst cases cannot recover from the loss and is forced to close the doors.   Lenders and customers tend to get very nervous when a key shareholder is no longer able to contribute to the profitability and service that they have become accustomed to.   A well thought out buy-sell agreement can alleviate the concerns of lenders and key customers and most importantly can offer peace of mind to each individual that has worked so hard to make the business a success.

Buy-sell agreements are commonly crafted as a criss-cross share purchase, a share redemption, or a combination the two.    The share redemption method requires the corporation to reclaim the ownership of the shares of the departing shareholder, or in some cases the ‘dearly departed’.   The criss-cross purchase provides for the remaining owners to buy-out the ownership interest of the departing owner.   In both cases the agreement requires the exiting shareholder or the heirs of that person, to be compensated based on the business valuation or a predetermined formula which establishes the fair market value for the shares.

In many cases, the shares of someone who has met with a ‘negative life outcome’ (the dearly departed), will be passed to a surviving spouse or children, and this brings us to one of the fundamental purposes of a buy-sell agreement.  Just imagine for a minute, that the surviving spouse or adult children of a current shareholder just inherited those common voting shares.  In the absence of a buy-sell agreement, the company has no obligation to buy, and the survivors have no obligation to sell the shares back to the company.   There is a high likelihood that someone with little knowledge of what it takes to sustain the business, will suddenly become an influential voting shareholder, and in some cases the majority shareholder!   That reason alone should be adequate motivation to seek trusted professional advice to either revisit your existing buy-sell agreement or to establish one if it doesn’t already exist!

As with any large animal (imagined or otherwise), it needs to be approached carefully.  Professional legal and accounting advice should be sought out and is well worth the fees involved.  As with many items that are vitally important but not necessarily urgent, it often requires someone to quarterback the process to keep it moving forward to completion.

The funding question … feeding the elephant.

Any buy-sell agreement will quickly fall apart if the funds are not readily accessible to fuel the buy-out.  Clearly not all of the potential events and circumstances that would trigger a buy-sell agreement can be protected.   However, two of the most devastating risks to the business and the shareholders can be addressed quite well: the long term disability or premature death of a shareholder.

Tax efficient capital can be available at the exact moment in time that it is needed most, to support and sustain the business through a transition period.   Protection is usually available at a net cost that is small by comparison when considering the alternatives.  After-tax saving and investing, increasing long term debt, or the forced sale of assets to raise the capital to satisfy a buy-out are options, but not great alternatives to the kind of protection that will serve to minimize the impact of cash flow and liquidity issues.  In Canada, the income tax act makes specific provision to allow for significant tax benefits when a life or disability insured buy-out is triggered.  Consider speaking with your professional life and health insurance advisor for more details on how these financial instruments can help you ‘feed the elephant’ in situations that would otherwise put a business and its’ shareholders in jeopardy.